Honestly, I didn’t even know what a Bedouin was before I went to Jordan.  I guess I have spent entirely too much time in the city to even vaguely understand that these people still exist. 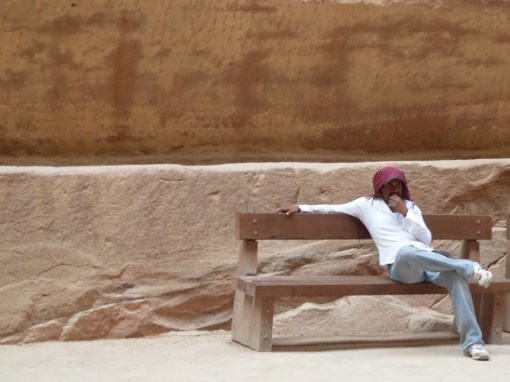 Not only do they exist, they seem to thrive.  I saw hundreds of them inside the UNESCO world heritage site of PETRA.  When I saw this cute little one, I could not resist her, as she had the most beautiful little smile.  She was a very plesant little thing and could speak some English. 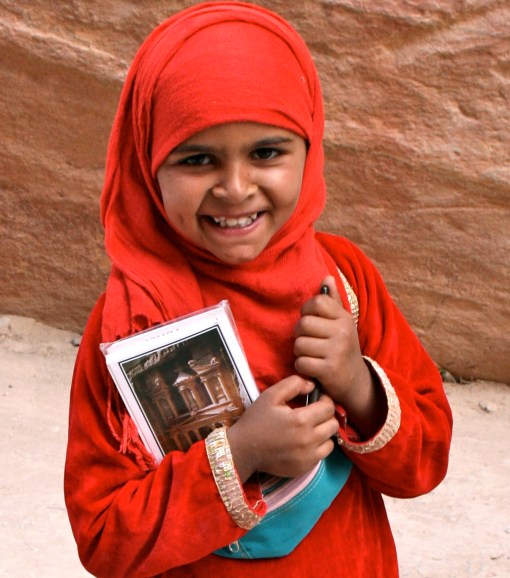 You can see that she got me right away with “One denar!”   See those post cards in her arms, well they are now mine for “one denar”.  The Bedouins are descendants of a nomadic tribe called the Nabatean. They are mentioned in the bible as people from Canaan. They have lived in Petra since prehistoric times and are desendents of the people who carved these magnificent structures into the side of mountains. 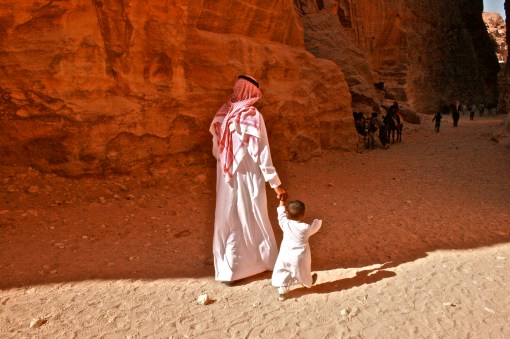 Now look at that little cutie and his Daddy!  I couldn’t keep my eyes off of them.  They walked and walked and walked the trails of Petra.  The dad seemed so patient and kind to his little one.  It was almost as if he was showing him off to us.  He took him up high into the cliff dwellings and even lifted him up to a caucasian western male, so that they could make it to the next level of dwellings. 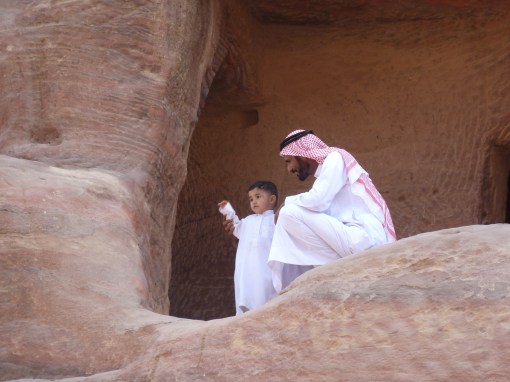 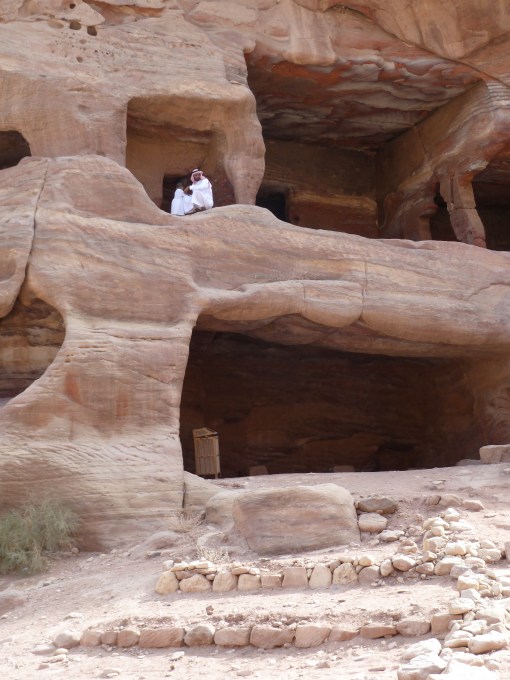 In 1985,  when UNESCO came into Petra and took over the preservation of this magnificent prehistoric site, they built a village just outside of Petra for relocation of most of the families that lived there.   In this village, they have electricity, water, houses, schools, telephone, internet and other modern amenities. 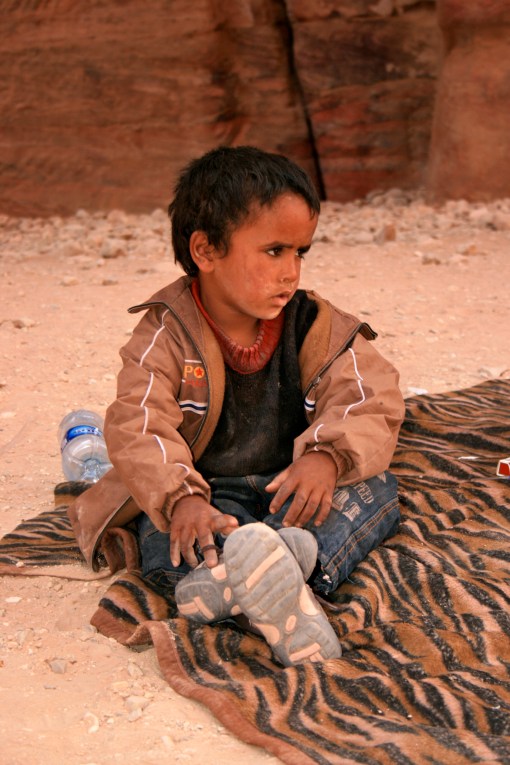 Take a look at this little cutie.  He was mesmerizing.  I couldn’t take my eyes off of him either.  In a way, he seemed sad.  He almost never moved and just sat there on that blanket with what appeared to be his grandfather playing the goat skin instrument called the Rabab with a bow.

A rabab player rests the instrument vertically on his knee and draws the bow across the string in a similar fashion to a cello player.  It is a rectangular wooden frame fitted on both sides with goat skin.  It is played with a bow that is typically made of real horsehair.

This instrument is the essential melody instrument of the nomadic Bedouins; customarily played by the sha’ir, or poet-singer, to accompany heroic and love songs. 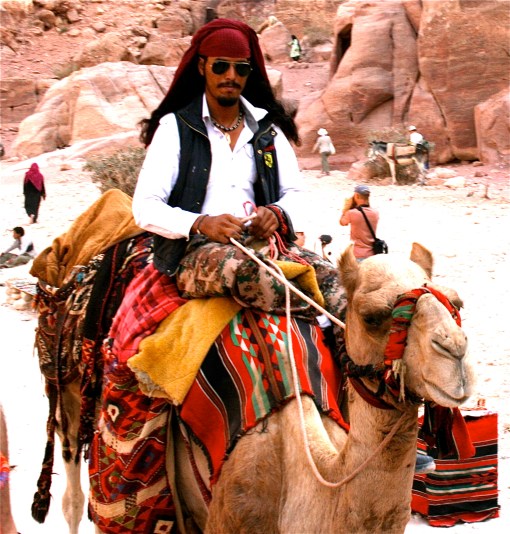 There are still about 100 families who live inside Petra, in tents and caves. These people have camels, donkeys, horses and goats, as well as mobile phones! 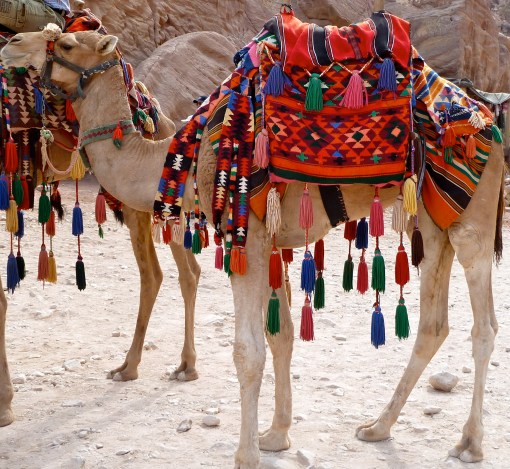 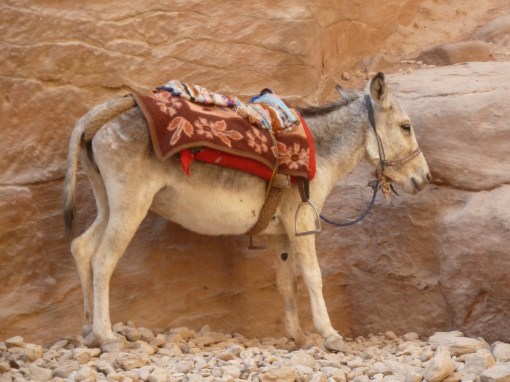 Most of them work as tourist guides inside of Petra. 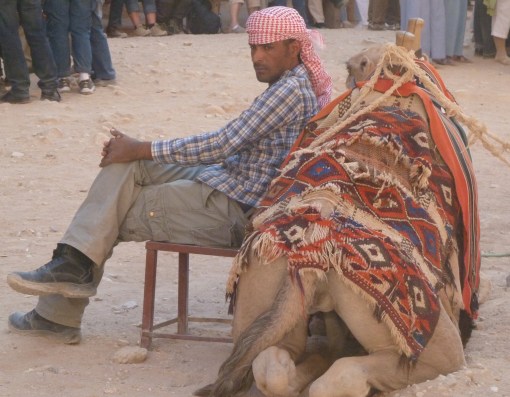 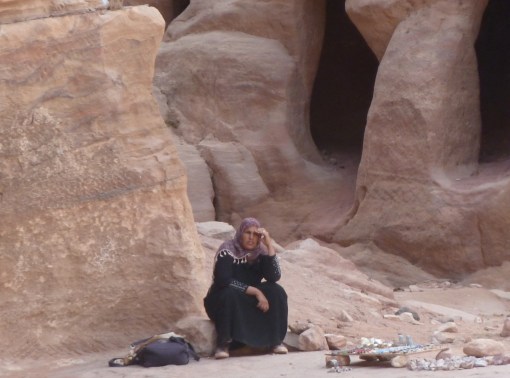 The women tend to sell jewelry and souvenirs and the children take travelers on their donkeys up and back to the Monastery or other various points within Petra. 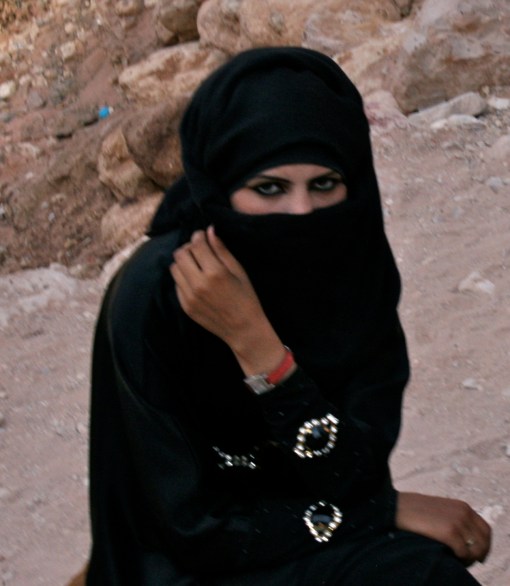 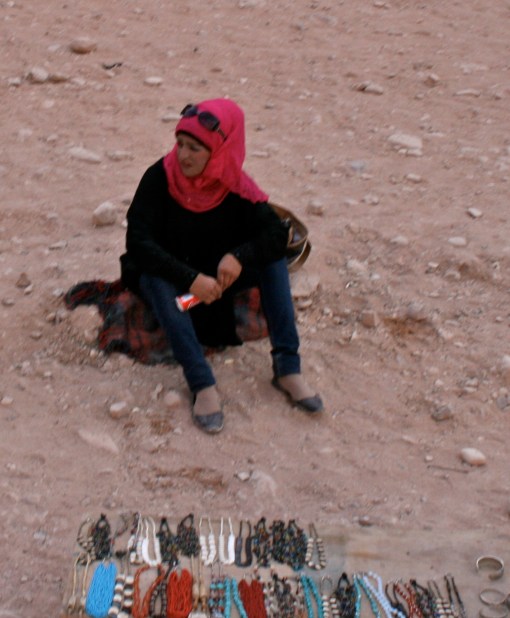 From their smiling faces, I can see that  they are as curious about us as we are about them! 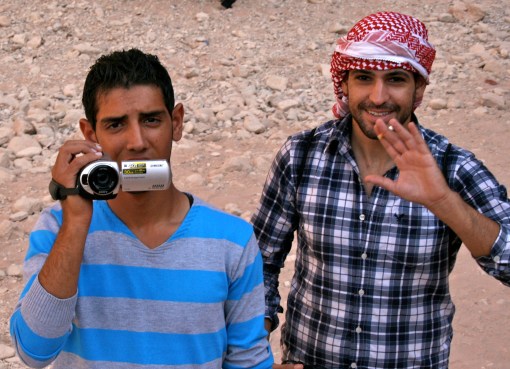 Dr. Cindy Maloney is a Miles Momma Featured Writer.  She writes Pointsandtravel, “Combining points and travel to create extraordinary experiences for your family“.